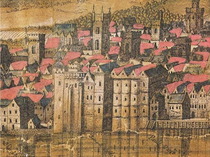 There have been two buildings known as Baynard's Castle, on different sites. Just to the east of where Blackfriars station now stands Ralph Baynard erected a Norman fortification in about 1000.  This was demolished by King John in 1213 and the site used for the Blackfriars Priory (the map on that page is very helpful).  In about 1300 a mansion was built to the south-east of the previous site on land reclaimed from the river.  This became a royal palace used by the House of York and the Tudors.  Henry VIII gave it to Catherine of Aragon as a wedding present.  Destroyed in the Great Fire, some ruins survived into the 19th century.  Now, 2013, occupied by the less than beautiful 1970s Baynard House.

A London Inheritance shows some photos take during the 1986 excavation of the area and points out that the original Baynard's Castle was at the western edge of the city, with the Tower of London at the east.

This section lists the memorials where the subject on this page is commemorated:
Baynard’s Castle

Centenary of the Royal Charter of the Institution of Chartered Surveyors