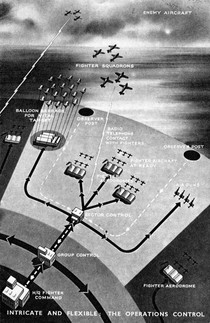 As part of WW2 the Germans set out to gain supremacy over the RAF in the British skies. This, the Battle of Britain, was the first time that a major campaign took place in the air. The Luftwaffe attempted to attack first shipping and ports, then airfields, then factories. Then cities and civilians were attacked in an attempt to demoralise the British people. This, the Blitz, ran from 7 September 1940 to 10 May 1941. When Churchill said "Never in the field of human conflict was so much owed by so many to so few." he was referring to the pilots of Fighter Command who successfully repelled the Luftwaffe.  And so the plucky Brits survived and went on to win the war, with some help from the Americans when they finally showed some interest.

The text from the Battle of Britain London monument tells the story well so we include it here:

War with Nazi Germany began in September 1939 and by June 1940 Hitler's forces had occupied most of Western Europe, with Fascist regimes also ruling in Italy and Spain. Further expansion of Nazi domination in Europe depended on Britain being neutralised by either invasion or surrender under German terms.

As Prime Minister Winston Churchill vowed that Britain would never surrender, the German High Command commenced "Operation Sealion", the invasion of Britain. The first priority was for Germany's Luftwaffe to gain control of the skies above the English Channel and South East England to prevent the Royal Navy and Royal Air Force attacking the German invasion forces while they were at sea.

On 10th July 1940 the Luftwaffe started a series of attacks on ports and convoys in the English Channel. Using advanced warning from radar stations, Britain was defended in the air by RAF Fighter Command, under Air Chief Marshal Hugh Dowding, with backup from balloon barrages and anti-aircraft gun installations on the ground. By early August, with German invasion forces and landing craft being assembled on the French coast, the attacks became much heavier with German bombers and fighters concentrating on RAF airfields and aircraft factories.

During the hot summer of 1940, pilots, many under twenty years of age, would "scramble" for their aircraft to intercept enemy raids as often as five times a day and into the night. Outnumbered in air battles, exhausted RAF squadrons were rotated to stations elsewhere in Britain and replaced by fresh units, often containing a high proportion of less experienced pilots.

By early September the increasingly critical situation, especially in Air Vice Marshal Keith Park's 11 Group, was relieved temporarily by the Luftwaffe turning its attention to London in a final attempt to break the British will to resist. The turning point came on 15th September when two huge air attacks were repulsed with heavy losses leading Hitler to concede that an invasion would fail. Day and night attacks continued through to May 1941 but the main assault had ended by late October 1940. This failure to subdue Britain would ultimately cost Germany the war.

Of the 2,936 pilots and aircrew who fought in RAF Fighter Command in the Battle of Britain, 544 lost their lives and a further 795 did not live to see the final victory in 1945. One in six were from countries outside the United Kingdom and on the plaques surrounding this monument their names have been grouped according to the airmen's country of origin. The plaques also feature the badges of their Squadrons.

It is in honour of the spirit and sacrifice of those immortalised as "The Few" and those supporting them that this monument has been erected.

This section lists the memorials where the subject on this page is commemorated:
Battle of Britain

Founded by local enthusiasts, whose passion for the Battle of Britain period ...