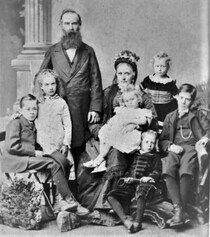 On 28 August 1859 he married Margaretta Andrews (1839-1893) in the District Church in the parish of All Saint's, Lambeth, where the marriage register shows him as a plumber & decorator and that they were both residing at 73 Princes Street.

On 12 May 1885 he was admitted to the Freedom of the City of London, by redemption, in the Worshipful Company of Tylers and Bricklayers. His admission papers gave his business address as Albert Works, Lambeth. This is probably the building which is now 5 Glasshouse Walk, SE11.  Its west face is alongside railway tracks and, as can be seen easily from passing trains, it is painted with the lettering 'B. E. Nightingale'.

On the night of the 1901 census he is recorded as a builder, visiting the Hydro, Richmond Hill, Richmond, Surrey, run by Richard Metcalfe. Probate records confirm that his business address was Albert Works, Albert Embankment, Lambeth and that he died, aged 65 years, at Metcalfe's London Hydro, Richmond Hill, Richmond. His death certificate showed the cause of his death as hepatitis for 2 years, anasarca for 2 months and exhaustion. Probate was granted on 25 July 1903 to Thomas Thompson, surveyor and Frank Taylor, solicitor. His effects totalled £23,894-14s-11d.

Our image of him, his wife and six of their children was taken in 1880 in Margate, Kent. It shows, left to right: Walter Herbert, Florence Annie, Benjamin Ebenezer, Margaretta, Percy Gilbert (on mothers lap), Alfred Ernest (below), Frank Andrews (above), Arthur Charles (on far right).

This section lists the memorials created by the subject on this page:
B. E. Nightingale

A market square in Woolwich. It was formed in the early 19th century and name...

In 1754 the Fruiterers had warehouses at the “Three Cranes”, situated in a la...