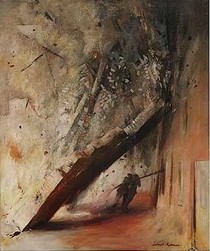 Crushed under a collapsing wall in Shoe Lane or St Bride Street while fighting a fire in the Blitz. Our picture, 'House Collapsing on Two Firemen, Shoe Lane' is a painting by Leonard Rosoman who, as a member of the Auxiliary Fire Service, was a witness to the event that killed Holder and one other. Holder came from Hendon.

The day we published this plaque David Underdown (via Facebook) gave us this CWGC link which provides:"... of 49 Cool Oak Lane, Hendon, Middlesex. Injured at Wine Office Court; died same day near St. Bartholomew's Hospital." However Wine Office Court is some distance away so either the plaque is wrong or the CWGC record is. Also Blitzwalkers says he was aged 49, but the CWGC says 33.

2018: A London Inheritance, discussing this painting,says "As an example of the challenges of accurate source data, the book “The War Artists” states that both firemen were killed whereas Rosoman’s obituary states that one of the firemen was the novelist and travel writer William Sansom (a friend of Rosoman), and the other, unnamed fireman, died in the collapse." The more we learn the less we know.

This section lists the memorials where the subject on this page is commemorated:
Auxiliary Fireman Sidney Alfred Holder