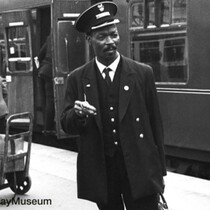 Asquith Camile Xavier was born in the West Indies. One of the Windrush generation who migrated to the UK after WW2. He died Chatham, Kent.

In 1966 Xavier successfully fought to become the first black worker employed as a train guard at London Euston station. Previously there had been a colour bar ensuring that only white staff could hold customer-facing roles.

Our Picture source has a short video about Xavier and the campaign for a plaque at Chatham Station, in his home town. In 2016 BBC Radio 4 produced the documentary: 'Asquith's Fight for Equality' and on 24 September 2020 the campaigned for plaque was unveiled at Chatham Railway Station

From the Black History Month website we confirmed his dates of birth and death and our colleague, Andrew Behan, also found that he arrived in Southampton, Hampshire, aboard the TN. Ascania of the Sandell Brothers Ltd line on 16 April 1958. According to the ship's manifest he was a planter, married, travelling alone, who held a passport issued in Dominica and had departed from Roseau, Dominica, giving 186 Ashmore Road, London, W9 as his intended place of residence in the UK.

This section lists the memorials where the subject on this page is commemorated:
Asquith Xavier

Unveiled in the the fiftieth anniversary year of his victory.

Singer and pianist who performed under the name of 'Hutch'. Born Leslie Arthu...