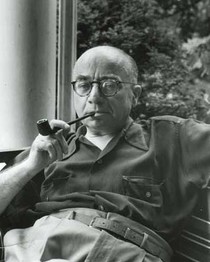 Graphic artist, book illustrator, stage designer and caricaturist.  Born Lodz Poland.  In Paris 1921 - 37.  The listing entry says: “Arthur Szyk, a noted artist of Polish-Jewish origin. …. Leaving London in 1940, Szyk became one of America's leading political artists by producing anti-Nazi cartoons during World War II. He was also a celebrated illustrator who created many works in the tradition of illuminated manuscripts. One such work was his Haggadah (the Passover story) published in London in 1940, after publishers in Poland and Czechoslovakia were reluctant to support the anti-Nazi work. For this reason, Szyk was in London sporadically from the early 1930s until 1940 when he toured Canada and the United States and eventually settled in the US after WWII. ….. The signs are related to Szyk's other work …. This is, however, the only composition by him executed in sculptural form.”  “Szyk is not known to have designed any other relief panels and this is his only work in any medium in the UK.” Died Connecticut, USA.  the picture source has examples of his distinctive graphic work.

This section lists the memorials where the subject on this page is commemorated:
Arthur Szyk