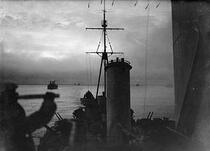 The Arctic convoys of WW2 were ocean-going convoys which sailed from the UK, Iceland, and North America to northern ports in the Soviet Union – primarily Archangel and Murmansk in Russia. There were 78 convoys, August 1941 - May 1945, with two gaps with no sailings July - September 1942, and March - November 1943.

About 1,400 merchant ships delivered essential supplies to the Soviet Union under the Lend-Lease program, escorted by ships of the Royal Navy, Royal Canadian Navy, and the U.S. Navy. 85 merchant vessels and 16 Royal Navy warships (two cruisers, six destroyers, eight other escort ships) were lost. Nazi Germany's Kriegsmarine lost a number of vessels including one battleship, three destroyers, 30 U-boats, and many aircraft.

The convoys demonstrated the Allies' commitment to helping the Soviet Union, prior to the opening of a second front, and tied up a substantial part of Germany's naval and air forces.

This section lists the memorials where the subject on this page is commemorated:
Arctic Convoys WW2

Canadian firefighter, a section leader from Montreal. Died in a road accident...