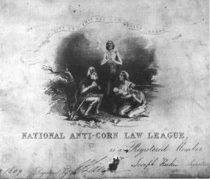 Founded in Manchester by Richard Cobden with the objective of having the Corn Laws abolished. This achieved, the League was dissolved.

The Corn Laws imposed a high import tax on foreign grain, thus protecting the profits of British growers, who were primarily the landowners, traditionally well-represented in Parliament. The losers of the Corn Laws were both the populous who, having fed themselves, had little money left for anything else, and the new industrialists who thus lost customers and also had to pay higher wages. The long dispute over the corn laws can be seen as a battle between the established landowning class and the new industrial powers.

This section lists the memorials where the subject on this page is commemorated:
Anti-Corn-Law League

A Commissioner for the 1892 Westminster Public Baths and Wash-houses and for ...

A Commissioner for the 1892 Westminster Public Baths and Wash-houses.