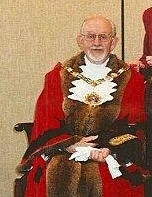 Electoral registers from 1954 show him and his wife listed at 65 Priory Road, Cheam, Sutton, Surrey. He was elected as a councillor in the London Borough of Sutton in 1990 and served as the Mayor of Sutton for the 1993-94 year of office. A founding trustee and former chairman of the Sutton Carers’ Centre he was also a member of the Institution of Electronic and Radio Engineers, as well as the editor of the institution’s professional journal for 15 years. . For the last three years of his life he lived at the Broadlands Nursing Home, 51 Burdon Lane, Cheam, Sutton, where he died, aged 87 years, on 6 February 2011.

This section lists the memorials created by the subject on this page:
Frank Sharp