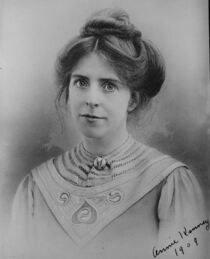 Working-class suffragette from Manchester, member of the WSPU and one of the most prominent women in the movement. Born Oldham. 1918, after some women had won the vote, she married James Taylor (1893–1977) and settled in Letchworth, where she died.

Ann Kenney was an English working-class suffragette and socialist feminist who became a leading figure in the Women's Social and Political Union. She co-founded its first branch in London with Minnie Baldock. Kenney attracted the attention of the press and public in 1905 when she and Christabel Pankhurst were imprisoned for several days for assault and obstruction, after questioning Sir Edward Grey at a Liberal rally in Manchester on the issue of votes for women. The incident is credited with inaugurating a new phase in the struggle for women's suffrage in the UK, with the adoption of militant tactics. Annie had friendships with Emmeline Pethick-Lawrence, Mary Blathwayt, Clara Codd, Adela Pankhurst and Christabel Pankhurst.

This section lists the memorials where the subject on this page is commemorated:
Annie Kenney