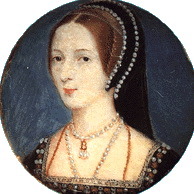 Second wife of Henry VIII and so Queen of England, 1533 to 1536. Though married to Catherine of Aragon, Henry developed a passion for one of her maids of honour, Anne, and so began the whole horrid mess which was the Reformation. the happy couple were married on 25 January 1533 and Anne gave birth to Elizabeth (later Queen) on 9 September that year. It's always said that Anne refused Henry's advances until they were married so the baby must have been almost a month premature. Anyway, Anne failed to produce any more living children, let alone the longed-for boy and Henry's eyes alighted on Jane Seymour. Anne was accused of high treason, adultery, incest and parking on a double yellow line, found guilty and beheaded on Tower Green.

This section lists the memorials where the subject on this page is commemorated:
Anne Boleyn

Either burnt or poisoned in prison for his Protestant beliefs. Son of Elizabeth.