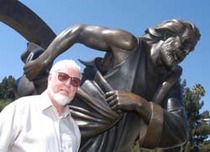 Sculptor. Born Surrey as Alan Rodney Collins. Trained in England and became associated with the Seventh Day Adventists. Provided a lot of sculpture for Guildford Cathedral. Joined the Seventh-day Adventists in the 1950s. 1968 moved to the USA and spent the next 20 years teaching in Adventist universities. Returned to Britain in 2013 and settled in Dorset.

Other work in London: The 'Minerva' in Montague Close, between Minerva House and Southwark Cathedral commissioned by National and Grindlays Bank (1966)in fibre-reinforced plastic with powdered aluminium.

This section lists the memorials created by the subject on this page:
Alan Collins