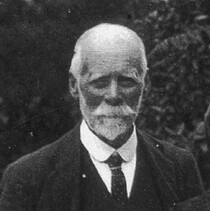 Composer, publisher, piano dealer. Alfred William Phillips was born in Whitechapel to a family in 'trade', one of which was a music shop, where he learnt piano tuning. When he started his own business in 1868, the purchase of the copyright of some of Charles Gounod's songs aided his success.

Who's Who in Music, Boston, 1913 has an entry for Phillips: "PHILLIPS, Alfred, composer and publisher ; b. 1844 ; of Welsh descent. Writer also, under noms de plume of "Sarakowski," for pianoforte compositions, and "Leigh Kingsmill" for songs. He was the founder, in 1868, of the firm Alfred Phillips, Ltd., piano-forte and musical dealers, and in 1883, in conjunction with Mr. Sydney Page, started the wholesale music publishing firm of Phillips & Page. … He retired from the firm in 1898, and went to reside for some years in North Devon. Mr. Phillips has written a great many lyrics for musical setting; and has also written and composed a number of Sunday school anniversary hymns, … Recreations : Gardening, woodcarving, bowls, tennis, chess, sketching, fishing, swimming, and sailing. Address: Llanoley, Harpenden.”

The Sibley Music Library (Rochenster, New York) holds his scrapbook: "Scrapbook of Alfred Phillips, late nineteenth-century English music publisher. The scrapbook served as an autograph album and is noteworthy for its inclusion of several letters from Charles Gounod."

We are indebted to West Hampstead Life for much of this information.

2021: Charlotte Fairlie, Phillips' great grand-daughter, kindly contacted us, provided the (c.1930) photograph, cut from a group shot, and some additional information, as follows:

Born 23 August, 1844, Whitechapel, son of Thomas Phillips, cheesemonger, and Helen Phillips, née Morley. His grandfather was George Morley, who had a piano and music business at High Street, Whitechapel and then in Stockwell. Alfred was manager at Stockwell before starting his own business in 1868. Alfred's Morley uncles were all in the music business in the London area. See, for example Morley Harps.

Alfred's business expanded (as described at West Hampstead Life) and employed most of his children. JSTOR describe his business and creative relationship with Gounod.

He handed the business on to his sons when he retired around 1899 and moved first to Appledore in Devon, then to Harpenden, Herts, then to Bournemouth after WWI, and finally to Bognor Regis, where he died on 15 November, 1936.

In Bognor, he was known as "The Grand Old Man of Bognor" in the local press. He was a real character. Charlotte attached an article in the Bognor Regis Observer (14 September 1932) by F. Proctor who interviewed Phillips, aged 88, for the Daily Express. Here we learnt that Phillips was of Welsh descent; he was one of 8 children; left school aged 7; signed the pledge (went teetotal) in 1838; founded the business in 1868, and in 1883, partnered with Sydney Page, he founded the wholesale music publishing business, Phillips Page Publishing; he had 10 children and was widowed aged 40; two years later he married again and had another child; at the time of the article he had 5 sons and 3 daughters surviving.

Arthur Todd Phillips (1887-1956), Charlotte's grandfather, was his youngest son and only child by his second marriage. Charlotte has found an advertisement for an event featuring the Kilburn Choral Society, which took place at the Kilburn Town Hall, probably in the late 1880s. At the bottom it says that tickets were available from Stanley Trehern or Alfred Phillips. The choral society was started by Trehern and his wife, Edith. These were Charlotte's other great-grandparents. Presumably, their children, her grandparents, met through the apparently rich musical scene they helped establish in Kilburn.

Arthur Todd Phillips was articled to C.F. A. Voysey and had a career in domestic architecture. He did not design the building with the plaques.

We'll close with a brief transcription from the newspaper article:
When he had his music shop at 43, High Road, Kilburn, he said that the chief announcement seen by visitors to Kilburn was the words in large letters upon a house, "Brown Practical Sweep." The Town Hall had been just erected {in the 1880s at nearby 254 Belsize Road}, and this "Grand Old Man" composed some verses, which ended thus:
"Come live in this place delightful;
We've a new Town Hall in the town,
Where a theoretical sweep is black,
And a practical sweep is Brown."

This section lists the memorials created by the subject on this page:
Alfred Phillips

Formerly known as the Midland Railway Basin (though we could find nothing und...