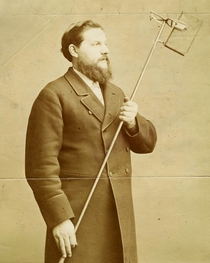 Alfred Cotgreave was born on 7 June 1846 in Eccleston, Cheshire, the son of Robert and Mary Cotgreave and was baptised as Alfred Robert Cotgreave on 4 April 1847 in St Catherine's Church, Tranmere, Cheshire. This was the only record that could be found with Robert as his middle name.

In the 1861 census he is described as a sailor midshipman, living at 17 Vassal Villas, Lambeth, with his parents. His father's occupation was recorded as a land surveyor. On 23 May 1866 he received his Board of Trade Certificate of Competency as a Second Mate in the Merchant Service.

He married Maria Moore (1836-1921) on 5 December 1870 in St Mary Magdalene Church, Liverpool, Lancashire, where the marriage certificate shows him as a mariner living in Liverpool whilst she is described as spinster residing in Northwich, Cheshire.

By the time of the 1881 census he had changed his occupation as he is described as a librarian, residing at the Public Library, Richmond, Surrey, with his wife. He was still a librarian when the 1901 census was taken, but he and his wife were now living at 166a Romford Road, West Ham, Essex. He completed his 1911 census return showing himself to be an inventor of library fittings and was occupying an eight roomed property at 29 Victoria Road, Great Yarmouth, Norfolk, with his wife and a female domestic servant.

Our image comes from a blog by Peter Cotgreave (an author and surely a relative?) who introduces some of Cotgreave's "library fittings" including this "Long-Reacher".  He also appears (having lost some hair) as "Chief Librarian" in the centre of a wonderful photo captioned "Stratford Library. West Ham library staff. c1900".

This section lists the memorials created by the subject on this page:
Alfred Cotgreave

Islington Librarian in 1906.  We believe he also published books on librarian...