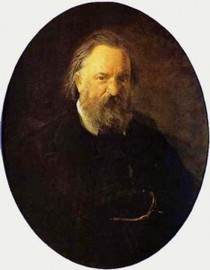 “Father of Russian socialism”.    Born Moscow into a land-owning family.   Had a number of run-ins with the authorities and emigrated for good in 1847.  Baron Rothschild assisted him in keeping his own assets.  He spent time in France, Italy and Switzerland, arriving in London in 1852, where he stayed until 1864.   Socialist political writer.  He worked for the freeing of the Russian serfs, which happened in 1861.  While in London he founded the Free Russian Press and published The Polar Star and The Bell.  He attracted many other Russian intellectuals to London.  Died in Paris.

The picture source is a valuable resource regarding Russians in London.

This section lists the memorials where the subject on this page is commemorated:
Alexander Herzen

The Picture of Dorian Gray

The only novel by Oscar Wilde. The eponymous character, after being painted, ...