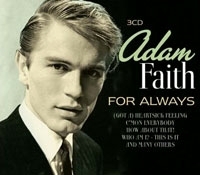 Singer and actor. Born as Terence Nelhams Wright at 4 Churchfield Road East, Acton. He was spotted while playing in a skiffle group in the 2i's Coffee Bar Soho, and subsequently made his first appearance on the '6.5 Special' pop music television programme. He became the first UK artist to have his initial seven records in the top five of the hit parade, including 'What Do You Want' and 'Poor Me'.

As his musical career began to wane, he took to acting, achieving great popularity in the television series 'Budgie' and appearing in the film 'Stardust'. Died after suffering a heart attack while on tour, at the North Staffordshire Royal Infirmary, Stoke-on-Trent, Staffordshire.

This section lists the memorials where the subject on this page is commemorated:
Adam Faith

Originally founded as the BBC Theatre Orchestra. It is the only one of the fi...

Jazz and R&amp;B singer and pianist. Born as Clive Powell in Leigh, Lancashir...