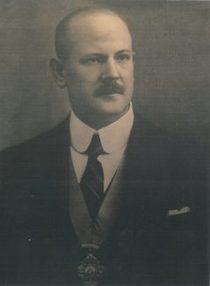 An undertaker in Poplar 1917. Andrew Behan has kindly carried out some research on this man. Archibald Richard Adams was born on 27 July 1881 at 12 Fairford Road, Bromley by Bow, London, E3, one of the twelve children of William Adams and Elizabeth Ann Adams née King. His father was a carpenter. Having established a business in 1900 as a funeral director at 187 Campbell Road, Bow, he married Nellie Jones on 14 June 1902 at Bromley St Leonards Church, Tower Hamlets.

He was initiated as a Freemason in the Caborn Lodge No.1804 on 2 February 1906. By 1917 he was also operating his business at 147 Leytonstone Road, Stratford. He moved to live at Manor Lodge, Rayleigh Road, Thundersley, Essex and died, aged 66 years, on 2 May 1948 at The General Hospital, Southend-on-Sea, Essex. Probate was granted to his widow and his estate totalled £17,538-6s-8d.

Both Hadleigh and Rochford have some useful information and photos.

This section lists the memorials created by the subject on this page:
A. R. Adams

Bare-knuckle prizefighter. Born in Bristol. He fought under the London Prize ...