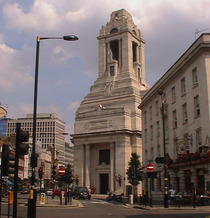 This section lists the memorials located at this site:
Freemasons Grand Lodge

The (working) clock is at the centre of the decorative panel that you can see...

This section lists the memorials located nearby this site:
Freemasons Grand Lodge