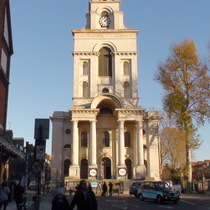 This section lists the memorials located at this site:
Christ Church Spitalfields - porch

This section lists the memorials located nearby this site:
Christ Church Spitalfields - porch