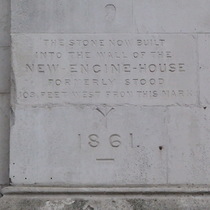 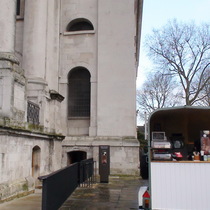 The stone now built into the wall of the new engine-house formerly stood 103 feet west from this mark.
1861

In our photo both these plaques are behind, and to the right of, the modern standing sign, with the paving stone in the ground directly below the wall stone.

The pavement stone, intended to fix the ownership of a patch of land, has rather failed in its duty, having gone walkabout for much of its life. On this page we interrogate these two plaques (and a nearby third). For more input, particularly from British History Online, see our page for the Spitalfields engine-house.

Referring to the Greenwood 1827 map, you can see that there was a small building in front of the church, and the ground north of that and to the west of the church was indeed ‘vacant’. From all the dimensions given we believe that the pavement plaque was originally affixed to that building, on its north side, the purpose of the stone being to record the church’s ownership of the land to the west of the church front, and north of the small building. This land is referred to as the ‘Esplanade’ in the quote on our page for the Spitalfields engine-house.

Then came the creation of Commercial Street, constructed 1843–5 and 1849-57 - see 1890 insurance map. This was effectively a widening to the east of the north-south road that was here before, Red Lion Street, causing the demolition of any buildings between that Street and the church, including our small building. At this point the stone was salvaged and "built into the wall" of the new engine-house. This strongly suggests that the small building was also an engine-house.

But the church has one more plaque which adds information – in 1843 anyone needing assistance putting out a fire was directed to apply to the “Station House, No. 1 Church Passage, Spital Square”. Stanford's map of 1862-71 shows a police station at the address given on the plaque (which would now be about where Lamb Street disappears underground at Elder Gardens). Seems likely that an engine-house, or the land it was on, could have, over 30 years, found a new life as a police station so we like to think this is the site of our “new engine-house” which received the plaque dislodged from the small building.

And then in 1861 the stone was retrieved from the new engine-house and installed here on the church, together with the wall plaque explaining what it is. The retrieval was probably prompted by the demolition of the new engine-house but we have not investigated that. Note: the "mark" used is similar to an upside down trig point mark but we think it is intended as an arrow pointing to the pavement plaque.

We've collected a total of 7 plaques on the outside of this church - see Christ Church Spitalfields - porch.

This section lists the subjects commemorated on the memorial on this page:
Christ Church Spitalfields - wall - engine-house

'Engine-house' was an early term for what we would now call a fire station. T...

This section lists the other memorials at the same location as the memorial on this page:
Christ Church Spitalfields - wall - engine-house

No erection date is given but we've guessed that the work was done and the pl...

But he did not live in the building here today, he lived in Furnival's Inn.

2018: We are grateful to Sugár Istvánné Ilona for pointing out that the plaqu...

The tree is outside our photo, to the left, south, set back from the road, in...