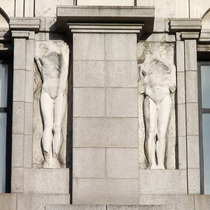 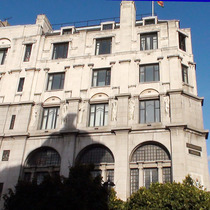 Don’t believe Wikipedia when it says that "the mutilated condition of many of the sculptures has nothing to do with prudish censorship". Any decay in the stone could easily have been repaired but it served as a convenient pretext for the effective removal of the sculptures.

In 1908 Epstein was given his first major project, to decorate the front of the new British Medical Association (architect Charles Holden) in the Strand. He designed 18, 8-foot-high statues of nude men and women symbolising the ages of man. His designs caused a public controversy; they were too sexual and too ugly. The National Vigilance Society and the Evening Standard published their opposition to anyone having to see the sculptures, at which people flooded into London to do just that. Artists and critics were equally vocal in support of Epstein and the BMA decided to withstand the pressure to remove the sculptures.

All went quiet until, 30 years later, the Rhodesian High Commission bought the building and then in 1937 a piece fell off. The Commission decided that the sculptures were inappropriate to their use of the building and potentially dangerous. The sculptures were hacked into the state that they remain today. Epstein’s career was permanently damaged by the controversy as can be seen by how few commissions he received over his lifetime. Art and Architecture shows casts of some of the original sculptures - judge for yourself.

This section lists the subjects commemorated on the memorial on this page:
Zimbabwe House - Epstein

This section lists the subjects who helped to create/erect the memorial on this page:
Zimbabwe House - Epstein