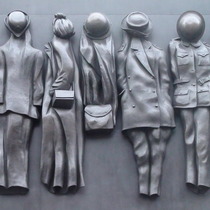 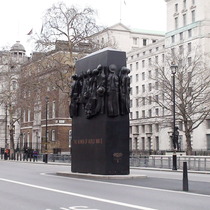 {Low on each long side:}
The women of World War II

{On a plaque attached to the south side:}
This memorial was raised to commemorate the vital work done by over seven million women during World War II.
Funded by the charity Memorial to the Women of World War II and supported by National Heritage Memorial Fund.

{On a plaque attached to the north side:}
Unveiled by Her Majesty The Queen, 9th July 2005

The typeface used on the sides of the monument replicates that used in war-time ration books. The unveiling was one of the ceremonies to commemorate the 60th anniversary of the end of WW2 and included a fly-past of military helicopters flown by all-female crews. And the whole thing went off without a single crash - amazing.

2017: We are being quite severely criticised on Facebook, and email, for that last statement, which was intended as irony. Our complainant seems to have a base in London so we will write and suggest a meeting with her to sort out this misunderstanding, and will report back.

The shape of this monument was inspired by that of the cenotaph up the road.

Learn more about this memorial at Raise your hats!

This section lists the subjects commemorated on the memorial on this page:
Women in WW2

This section lists the subjects who helped to create/erect the memorial on this page:
Women in WW2

Memorial to the Women of World War II

A York-based group of volunteers set up to raise funds for the memorial in Wh...

From their website: "The National Heritage Memorial Fund (NHMF) was set-up in...

{Left hand page of an open book:}To commemorate the scouts of the 2nd Walwort...