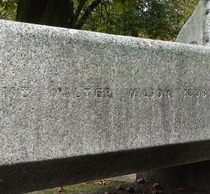 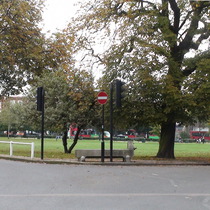 Given by Mrs Walter Wilson 1898

When we published this trough in April 2015 we bemoaned the lack of information on Mr and Mrs Wilson. Andrew Behan, took on the challenge and we're sure he's identified our couple. Here are Andrew's findings:

According to the 1891 census, there was a Walter Wilson residing at 7 Haven Green, Ealing, which is almost opposite this water trough (near the Gordon Road junction). He was aged 74 years, a retired Fellow of the Royal College of Surgeons and living there with his wife Eliza, a Cook, a Housemaid and an Under Housemaid. He died on the 29th November 1893 and left an estate of £589.

His wife lived on at the address and was shown on the 1901 census as 'Living on own means', with a Ladies Companion called Mary Knight, a Cook and a House Maid. She died on the 17th January 1902 leaving an estate of £5,401.

The social stratum, the money, the proximity of their home, the 1898 date - surely we have found our couple. More information about them on Eliza's page.

This section lists the subjects commemorated on the memorial on this page:
Wilson horse trough

Compare and contrast with Emily Orbell's fountain (B).

{On the (non-working) drinking fountain, on the top surface on the north side...