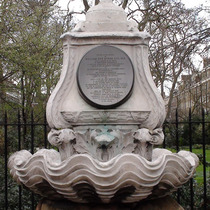 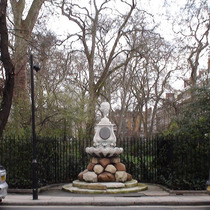 {On a modern plaque at the front:}
Erected by the friends of William Pitt Byrne, Esq. M. A. after a design by his widow in affectionate remembrance of the rare combination of estimable qualities which in life his modesty concealed. To his strict integrity, political consistency, noble disinterestedness, and uniform determination to vindicate the cause of independent journalism, may be ascribed his success as proprietor of the Morning Post, in maintaining the elevated tone it had attained under his father. His acquirements in classical and general literature, his love of science and art, his proficiency in music and the countenance by which he promoted their cultivation, were not less attractive than his singleness of heart, forgiving temper, generous appreciation of others, unobtrusive piety, and practical charity, rendering this refreshing fountain a suitable memorial of his worth.

{inscribed into the stone at the back:}
Offered to the public, 1862.

He sounds a stubborn prig, doesn't he? The plaque is clearly a recent addition but presumably has taken the wording directly off a damaged original. The stone is quite weather-worn particularly the urn on the summit but the fluted, shell-like basin is very attractive - well done, Julia.

2017: Londonist examines the text with a journalist's eye and suggests this could be London's Most Overblown Plaque. They have also published Julia's design which makes an interesting comparison with the monument itself.

This section lists the subjects commemorated on the memorial on this page:
William Pitt Byrne

This section lists the subjects who helped to create/erect the memorial on this page:
William Pitt Byrne

{On the east end:} In memoriam Charles Kingsley {Above this there seems to be...

This figure represents the woman of Samaria (a Samaritan) at the well, from S...

Donated in 1950. The surrounding terrace layout was designed by Goetze in co...

{Carved in the marble surface at the back:}Erected to the memory of H. Hayhil...