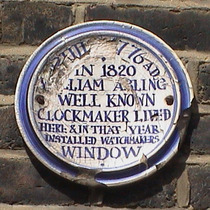 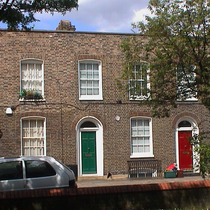 This is an extremely unusual plaque: its form and content are unique. Clearly hand-made, the writing just looks old. The plaque is either a very unusual and very early example, or a fake.

The plaque is held in place with modern style screws and the pointing on the wall behind is in good condition. Either the plaque was removed for this work or was erected afterwards. The current owner has been there since 1983 and has never (in 2009) moved the plaque. The previous owner had been there since the 1970s.

We researched the plaque as best we can but it seems to have escaped notice; even Islington Local History have no record of it. The houses in the terrace are all listed but the entry carries no reference to the plaque and the date of construction is given as 1798 - 1800, not 1776 as on the plaque.

The Keeper of The Clockmakers' Museum at the Guildhall was very helpful and confirms that there was a clockmaker, William Abeling or Abelling, advertising his services at 7 Wynyatt Street in 1817-23 but he was not a member of the Worshipful Company of Clockmakers.

Re the "clockmakers window". This is not a well-known expression, nowadays, but the owner explains that a window at the back of the house (getting northern light) is "like a sash window on its side" thus providing light to a number of people working at the window, much more effectively than would a normal vertical window.

If genuine, the plaque was probably created not long after 1820, by someone who knew Abeling and wanted to keep his memory alive, possibly one of his children. Alternatively perhaps a later owner researched the history of the house, found out about Abeling and decided to mock up a plaque, but, one has to ask, why? It would not have been cheap, unless they had the necessary skills themselves. If it is a fake then the damage sustained by the plaque could be deliberate "distressing" to make it look old.

All in all, we think the plaque is a reasonably modern creation but we are still pleased to have found it.

Our colleage, Jamie Davis, found Abeling in 1826 as a "Candidate from the Working Class" standing for the Committee of the London Mechanics' Institute.

This section lists the subjects commemorated on the memorial on this page:
William Abeling

Clockmaker, lived and worked Wynyatt Street and in 1820 installed a watchmake...

{Beneath an image of a Victoria Cross medal:}Second Lieutenant Edgar Myles We...

Dedicated to the memory of Olof Palme, leader of the Swedish Social Democrati...