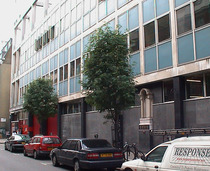 {In the ornate wreath at the top:}
Pro Patria et Libertate
{Above the list:}
To the honoured memory of our heroic comrades who fell in the Great War 1914 - 1919.
{The main plaque contains 130 names in 2 columns in alphabetical order. See the Subjects Commemorated for the names on the list.}
{On the upper part of the plinth:}
Subscribed for and erected by their colleagues of the Western Postal District as a lasting tribute to their self-sacrifice.
{On the lower part of the plinth is a brass plaque, headed up '1939 - 1945' and containing 56 names in 4 columns in alphabetical order:}

{And lastly, there is a small plaque, below all the others:}
This war memorial was erected within the precinct of the former Wimpole Street Post Office circa 1920. In 1981 it was relocated to this site.

The plaque does not point out that not all of the WW2 names were in the armed forces when killed: H. F. Phillips had survived his service in WW1 and in 1944 was a civilian, killed by a bomb landing on London.

Andrew Behan informed us that in 2013 this office was closed for redevelopment and the memorial was moved to the Mount Pleasant Sorting Office.

This section lists the subjects commemorated on the memorial on this page:
Western Postal District war memorial - Rathbone Place

Serjeant John Abrahall.  He was born on 6 February 1875 in Buttevant, County...