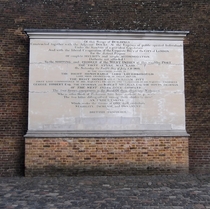 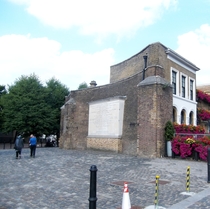 Of this range of buildings constructed together with the adjacent docks, at the expense of public spirited individuals under the sanction of a provident legislature, and with the liberal co-operation of the corporate body of the City of London, for the distinct purpose of complete security and ample accommodation (hitherto not afforded) to the shipping and produce of the West Indies at this wealthy port, the first stone was laid on Saturday the twelfth day of July A.D. 1800 by the concurring hands of The Right Honourable Lord Loughborough, Lord High Chancellor of Great Britain, The Right Honourable William Pitt First Lord Commissioner of His Majesty's Treasury and Chancellor of His Majesty's Exchequer, George Hibbert Esq, the chairman and Robert Milligan Esq the deputy chairman of the West India Dock Company. The two former conspicuous in the band of those illustrious statesmen who in either House of Parliament have been zealous to promote the two latter distinguished among those chosen to direct an undertaking which, under the favour of God, shall contribute stability, increase and ornament to British commerce.

You have to admire the 1800 skill at sentence construction, and the confidence that others wold be equally skilled at reading the results.

British History Online gives "...  the foundation stone of the first warehouse, at the south-east corner of what became No. 8 Warehouse. The stone carried a commemorative inscription, later replicated at the base of the clock-turret on No. 5 Warehouse, at the centre of the north quay".  We cannot find a photo of the stone at its original location. No 8 Warehouse had been demolished by 1982 when the Billingsgate fish market moved from the City of London to its new building on the north side of the north dock, at the east end. That was probably when the, unusually large, foundation stone was retrieved and reinstalled here, close to the Museum of Docklands. No 5 Warehouse has also been lost.

This section lists the subjects commemorated on the memorial on this page:
West India Docks - foundation stone

Merchant and politician. Born in Manchester. Along with Robert Milligan, he w...

A series of three docks on the Isle of Dogs. Their construction was largely t...

In the photograph of the current building the plaque is behind the portico.

At the top, below the badge for the City of London Artillery:}Their name live...