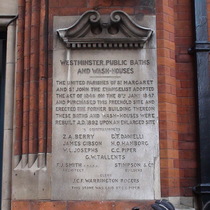 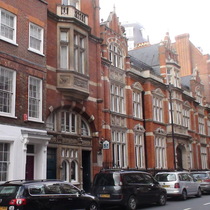 This stone was laid by C. C. Piper

Seems likely that the F. J. Smith is the same architect as the one who built Caxton Hall with William Lee.

Andrew Behan has researched some of these names and points out that in the same year that these baths were rebuilt Commissioner Danielli was initiated into Commissioner Berry's Masonic Lodge, which had been co-founded by Commissioner Gibson, a few years previously.

The foundation stone is immediately to the right of the entrance.

In the 1990s the baths were replaced with the Westminster Archives Centre, a community centre and meeting space called the Abbey Centre. Historic England has an 1893 photograph.

This section lists the subjects commemorated on the memorial on this page:
Wash-house foundation stone

Builders of the 1892 Westminster Public Baths and Wash-houses.

A Commissioner for the 1892 Westminster Public Baths and Wash-houses.  Geni h...

This section lists the subjects who helped to create/erect the memorial on this page:
Wash-house foundation stone

St John's Gate This building was the main entrance to the Grand Priory of the...

On this site stood six successive Livery Halls of the Cordwainers' Company fr...

In memory of Joan Bartlett, aged 18 and Violet Pengelly, aged 19.Members of t...