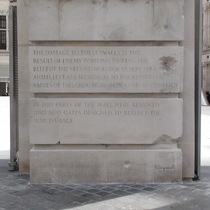 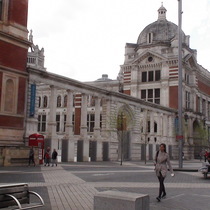 The damage to these walls is the result of enemy bombing during the Blitz of the Second World War, 1939 - 1945, and is left as a memorial to the enduring values of this great museum in a time of conflict.

In 2017 parts of the wall were removed and new gates designed to reflect the war damage.

The text is engraved on the wall at the new (2017) entrance in Exhibition Road, but the damage can be seen all the way down to Cromwell Road.

The upper inscription has been in place since at least the 1990s, probably much longer. The lower inscription was added in 2017 when the screen wall was opened up but we didn't understand in what way the new gates "reflect the war damage" so we went hunting and found this: "The gates have been manufactured with a pattern of perforations tracing the imprint of the shrapnel damage on the stonework as well as the Royal Crest in the central gate." We think the gates would have to be shut for this to be apparent.

The work was finally done and opened to the public in 2017.  A stone on the east side of the courtyard reads "Her Royal Highness the Duchess of Cambridge opened this Exhibition Road Gallery courtyard and entrance hall, 29 June 2017." And a shiny steel plaque on the south side reads "The Sackler Courtyard - Constructed in 2017 with a gift from: The Dr Mortimer and Theresa Sackler Foundation, Ilene Sackler Lefcourt, Kathe A. Sacker MD, Samantha Sackler Hunt, Mortimer D. A. Sackler, Marissa T. Sackler, Sophia Sackler Dalrymple, Michael D. Sacker." We learnt at the Standard that those are the 7 children of Mortimer and Theresa, and also that the source of their wealth seems to be tied up with America’s opioid crisis.

2019: Diamond Geezer pointed out how extensive has been the Sackler penetration of London's cultural scene.

2022: The Evening Standard reported that Tate is beginning to distance itself from Sackler: "Tate Modern has removed a plaque bearing the Sackler name due to concerns over the billionaire family’s link to the opioid crisis in the US. The Sackler Octagon at the Tate Britain in London is also set to be renamed. The Sunday Times reported that a plaque marking the Sackler Escalator at Tate Modern was removed last week, and a sign by its Sackler lifts will be taken down." One wonders when the V&A will rename their Sackler items.

March 2022: ArtNet reported "The British Museum Drops the Sackler Name From Its Galleries, Joining a Growing Flood of Institutions Cutting Ties With the Family.  ... In London, the National Gallery has the Sackler Room, and the Victoria & Albert Museum has the Sackler Courtyard. The V&A has been steadfast in its continued support of the Sacklers, but a National Gallery spokesperson told the New York Times on Friday that sponsorships and philanthropic support “are constantly under review.”"

This section lists the subjects commemorated on the memorial on this page:
War damage at V&A

This section lists the other memorials at the same location as the memorial on this page:
War damage at V&A

Site of the 13th century Hospital of St Anthony and of the French Protestant ...

The quotation is from Psalm 41, the King James Version. While at school, Sha...

RAINBOW CORNERThis plaque is placed here as a tribute to all ranks of the Uni...