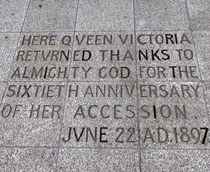 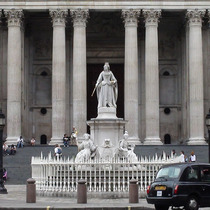 Here Queen Victoria returned thanks to almighty God for the sixtieth anniversary of her accession.
June 22 AD 1897

These letters are incised into the pavement area between the Queen Anne statue and the steps to St Pauls.

Queen Victoria visited St Paul’s for her Diamond Jubilee Thanksgiving Service which, since the Queen did not get out of her carriage (lazy old thing), was held on the steps between the doors and the statue.

Spitalfields Life have a c.1910 photo of this pavement inscription in its first incarnation.

This section lists the subjects commemorated on the memorial on this page:
Victoria at St Paul's

This section lists the other memorials at the same location as the memorial on this page:
Victoria at St Paul's