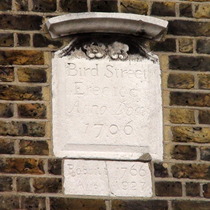 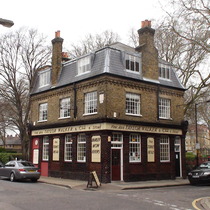 We'd guess that the first stone was created and erected in 1766 when the building was rebuilt. And in 1927 it was decided to carry on the tradition.

This, north-south, section of Tench Street used to be called Bird Street. This pub's address has also been given as 1 Green Bank (the other road at this junction.

The large plaque about the recent history of the building is on the wall beside the car. The other is on the corner nearest the camera, at first floor level.

Between about 1803 and 1956 this building was just a stone's throw from part of the London Docks, Wapping Basin (now the John Orwell Sports Centre) which must have made it much busier than it is today.

This section lists the subjects commemorated on the memorial on this page:
Turk's Head - Wapping - 1

This entry discusses two pubs in Wapping, both called the Turk's Head. The T...

This section lists the other memorials at the same location as the memorial on this page:
Turk's Head - Wapping - 1

Royal Borough of Kensington and Chelsea Royal Avenue was laid out by Sir Chri...