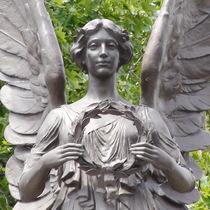 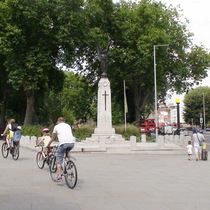 {On the front of the shaft:}
Erected by the inhabitants of Tottenham in proud and grateful memory of her sons who fell in the Great War, 1914 – 1918, 1939 – 1945.
{On the base, at the front, right and left:}
“Greater love hath no man than this”
“Pass not without remembrance”
“Their name liveth for evermore”

The statue is named 'Victory'. While the form of the monument is very different, the inscription is extremely similar to that on the Edmonton war memorial, which we have not yet collected.

“Greater love hath no man than this” is from John 15:13.
“Pass not without remembrance” - we cannot locate the source.
“Their name liveth for evermore” is from Ecclesiasticus 44:1-14.

This section lists the subjects commemorated on the memorial on this page:
Tottenham Green war memorial

Tottenham's sons who fell in WW1 and WW2

This section lists the subjects who helped to create/erect the memorial on this page:
Tottenham Green war memorial