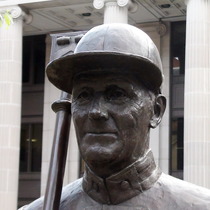 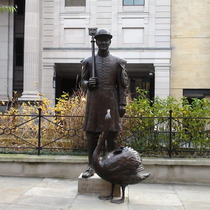 {On the front of the small stone plinth:}
The barge master & swan marker of The Vintners Company

{Inscribed on an elbow:} WDR

Believed to be the first public sculpture in London commissioned by a Livery Company. We would have expected the inscriptions (WDR and W) to refer to the sculptor but perhaps it's the founder. The Vintners and Dyers Companies share in the ownership of mute swans with the monarch and it is their job to catch and ring them in a ceremony known as 'swan upping' done each June. See A London Inheritance for info including photos. The Swan Marker is in charge of the Vintners’ Swan Uppers for the event, but also wears the uniform of Barge Master, dating back to the time when the Company owned a ceremonial barge on the Thames.

This section lists the subjects commemorated on the memorial on this page:
The Vintners

This section lists the subjects who helped to create/erect the memorial on this page:
The Vintners

Sealing of the Magna Carta - Egham

Is there a verb "to sculpture"? The tableau panels, the "achievements of the...