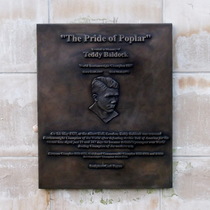 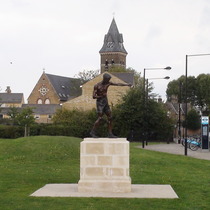 On 5th May 1927, at the Albert Hall London, Teddy Baldock was crowned Bantamweight Champion of the World after defeating Archie Bell of America for the vacant title. Aged just 19 and 347 days, he became Britain's youngest ever world boxing champion of the modern era.

When we first visited, September 2014, there was no plaque, just two holes drilled in the front of the plinth to indicate that there had been one. December 2015 our colleague Alan Patient found this plaque in place. We don't normally give plaques attached to statues' plinths their own page but since this one is quite nice, and also has a history of disappearing, we thought we'd give it the treatment.

Facebook page shows the unveiling.  Langdon Park School, the buildings just to the south of the statue, is built on the site of Baldock's childhood home in Byron Street.

This section lists the subjects commemorated on the memorial on this page:
Teddy Baldock - plaque

This section lists the other memorials at the same location as the memorial on this page:
Teddy Baldock - plaque

{Beneath a representation of the Victoria Cross medal:}Private George Cartwri...

{On the marble base:} To the sacred and loving memory of the Aloysians who ga...

Possibly the loveliest plaque in London.