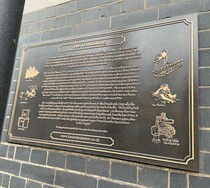 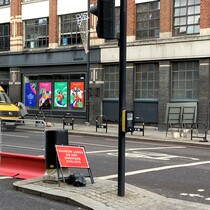 This plaque commemorates 350 years of the tea industry in the City of London. The industry was spread over Plantation House (now Plantation Place), Mincing Lane, Fenchurch Street, Great Tower Street, Leadenhall Street, St. Katharine Docks and Commodity Quay. It all began with the British East Indian Company who had a monopoly over tea from China & India and at one point, the City of London controlled over 85% of the World’s tea trade.

{The central section of text gives a good history of this trade and we have put our transcription on our Tea Trade in London page.}

The Tea Building was built in 1931-33 for the iconic Lipton brand of Allied Foods Ltd. Originally the building was built as a bacon factory but was then used to pack tea for much of its life. The building had offices on the ground floor along with the checking and despatch department. On the top floor was Lipton’s Tasting and Blending Room. Several buildings were merged together and, from the late 1930s, it was used to pack tea. Today Lipton is a household name across the world. Sir Thomas Lipton, who entered the tea trade in 1889, coined the globally recognised slogan “Direct from the Tea Gardens to the Teapot”.

This plaque has been installed by The London Tea History Association, www.londonteahistory.co.uk.

Now, where's the best place to attach this plaque? Oh, there's a lamppost close up to the building - let's put it behind that. Sigh.

London Tea History's website adds some information about this building:

"The Tea Building was originally built as a bacon factory for Allied Foods' Lipton brand in the early 1930s, and is full of original features that make it a unique place to work.

It's owned by Derwent London and is home to a busy community of marketing agencies, media companies, fashion brands, retailers, artists and designers, as well as the Pizza East restaurant, and the Shoreditch House private members club across the top two floors.

It's joined internally to the Biscuit Building next door, a slightly older but equally impressive warehouse which was principally used as a tea packing warehouse for most of its life.

In the Second World War an air raid shelter was added to the building, but despite the Luftwaffe's best efforts, Tea survived the blitz with little damage. In 1947 part of the sixth floor was converted into a self-service staff canteen catering for over 500 staff and a passenger lift was added in 1950."

This section lists the subjects commemorated on the memorial on this page:
Tea industry - Shoreditch

The following text is taken from the Shoreditch plaque: This plaque commemor...

This section lists the subjects who helped to create/erect the memorial on this page:
Tea industry - Shoreditch

Founded to record and commemorate over 335 years of the World’s tea trade in ...

James Bannister of Bow, aged 30, rushed over when an opposite shop caught fir...

As you can tell from the photograph, this modern plaque is extremely difficul...