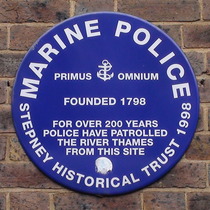 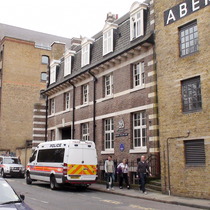 Marine Police
Primus Omnium. Founded 1798. For over 200 years police have patrolled the River Thames from this site.
Stepney Historical Trust, 1998.

The Latin motto "Primus Omnium" translates as "first of all", referring to the fact that the Marine Police was established over 30 years before the Metropolitan Police (yah, boo) and was the first police unit in the world.

Ediths Streets tells us that this 1910 building is by John Dixon Butler. For an architectural adventurous building see the 1973 River Police Boatyard, a short distance to the west.

This section lists the subjects commemorated on the memorial on this page:
Marine Police

This section lists the subjects who helped to create/erect the memorial on this page:
Marine Police

On this site stood the Gaiety Theatre, built in 1903 for impresario George Ed...

City of London Tower BridgeConstructed and maintained by the Corporation of L...