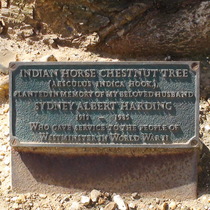 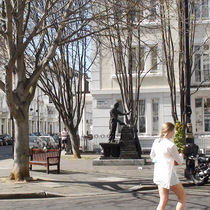 Shortly after we published, our colleague, Andrew Behan, spotted that we'd misread Harding's birth year. We had 1919 but on closer examination it's clearly 1913. And that tallies with Andrew's findings in the the General Register Office - England and Wales Civil Registration Indexes, December 1985 in Westminster shows a death record for Sydney Albert Harding with his date of birth as 10 May 1913 and his age as 72 years.

The Harding tree is on the far left of our photo, and seems a goodly size for one not planted before 1985.

This section lists the subjects commemorated on the memorial on this page:
Sydney Albert Harding

Gave service to the people of Westminster in World War II.

This section lists the subjects who helped to create/erect the memorial on this page:
Sydney Albert Harding

This section lists the other memorials at the same location as the memorial on this page:
Sydney Albert Harding

This tree has been planted to commemorate the life of Doreen (Dorrit) Collins...

This tree commemorates the life of Brian Knights who fell to his death on 2 A...