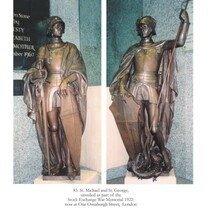 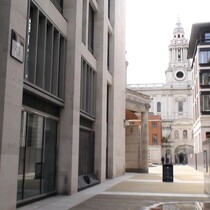 Thomas Brock: Forgotten Sculptor of the Victoria Memorial provides a photo of the St Michael and St George statues that were originally part of the memorial. The text says: "The figure of St Michael is one of the best pieces of modelling that ever came from his {Thomas Brock's} studio." The photo is captioned: "St Michael and St George unveiled as part of the Stock Exchange War Memorial 1922: now at One Osnaburgh Street, London."

Behind St Michael can be seen a foundation stone unveiled by the Queen Mother in 1967. This indicates that the building with the green marble hallway was built in 1967.  We can find no such building in Osnaburgh Street so it has probably been demolished.

St Saviour's Hospital was at the southern end of Osnaburgh Street and was closed in 1962.  We wonder if this was the site visited by the Queen Mother 5 years later.

This section lists the subjects commemorated on the memorial on this page:
Stock exchange war memorial - St Michael & St George

This section lists the subjects who helped to create/erect the memorial on this page:
Stock exchange war memorial - St Michael & St George

This section lists the other memorials at the same location as the memorial on this page:
Stock exchange war memorial - St Michael & St George

{Inscribed on the glass:} In memory of our members and staff fallen in defenc...