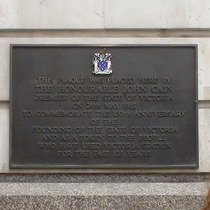 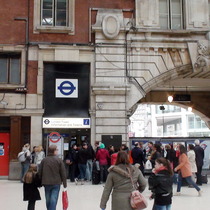 This plaque was placed here by the Honourable John Cain, Premier of the State of Victoria on 24th May 1985 to commemorate the 150th anniversary of the founding of the state of Victoria and as a token to the people who have used Victoria Station for the past 125 years.

According to Wikipedia the State of Victoria was founded in 1851 so this plaque was erected 16 years too early to commemorate that event. However 1985 was indeed the 125th anniversary of the opening of Victoria station. Looks like they needed someone relevant to unveil a plaque to the station, the Premier of Victoria happened to be in town so they used him and stretched history (by 16 years!) to shoehorn the two together.

This section lists the subjects commemorated on the memorial on this page:
State of Victoria, Australia

The London Brighton and South Coast Railway opened their side of the station ...

This section lists the subjects who helped to create/erect the memorial on this page:
State of Victoria, Australia