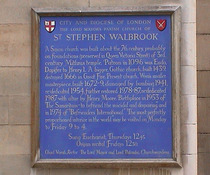 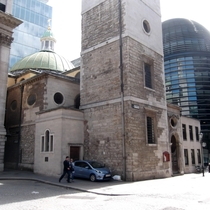 City and Diocese of London.
The Lord Mayor's parish church of St. Stephen Walbrook.
A Saxon church was built about the 7th century, probably on foundations (preserved in Queen Victoria Street) of 3rd century Mithras temple. Patron in 1096 was Eudo, Dapifer to Henry I. A bigger, Gothic church, built 1439, destroyed 1666 in Great Fire. Present church, Wren's smaller masterpiece, built 1672-9, damaged by bombing 1941, rededicated 1954, further restored 1978-87, re-dedicated 1987 with altar by Henry Moore. Birthplace in 1953 of "The Samaritans - to befriend the suicidal and despairing" and in 1974 of "Befrienders International". "The most perfectly proportioned interior in the world" may be visited on Monday to Friday 9 to 4.
Sung Eucharist: Thursdays 12.45.
Organ recital: Fridays 12.30.
Chad Varah: Rector
The Lord Mayor and Lord Palumbo: Churchwardens.

2011 - our colleague Alan reports that this board has been replaced with a much less interesting one. We'll pretend we don't know that.

Our entry for St Stephen Walbrook Church below, gives the address of their excellent website with lots of information and pictures. London Historians blog has some photos of the inside, including the original telephone used by the Samaritans.

2015: our colleague, Alan Patient, sent us two photos showing the church with the original blue wooden-framed plaque replaced with a red one, and a new standard City of London plaque.

This section lists the subjects commemorated on the memorial on this page:
St Stephen Walbrook Church

Contains an 1987 alter by Henry Moore.

Formed by Chad Varah at St Stephen Walbrook Church to befriend the suicidal a...

This section lists the other memorials at the same location as the memorial on this page:
St Stephen Walbrook Church

In St. Stephen Walbrook on 2 November 1953 the Samaritans were founded by Dr....

"Form rooms" is what many public schools call their class rooms, after the fo...

St. Olave’s Silver Street. This churchyard was thrown back and the road widen...

Surrey Iron Railway Company 1801{At the centre is an image of a draped female...