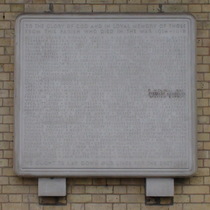 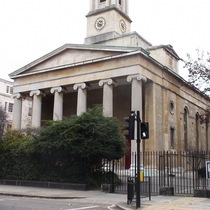 To the glory of God and in loyal memory of those from this parish who died in the war 1914 - 1918.
{The 146 names are then given in a continuous text, left and right justifed, not in the usual left justified text. See Subjects commemorated for the list.}

We ought to lay down our lives for the brethren.

The Biblical quotation at the end of the inscription is from 1 John 3:16.

This is a very unusual style for a WW1 memorial and we think it was created much later, we'd guess sometime after the 1960s. Nowhere does it say so but it must be a replacement for the lost memorial referenced by the inscription on the stone seat, possibly as part of the restoration following the 1987 fire.

The names are listed alphabetically but oddly, with double-barrelled names (and there are quite a few, this being Chelsea) the second part is used for sequencing purposes, not the first, as is more common. The darker patch that you can see in the photo is where the lettering of three names has been darkened, rather inexpertly and for no reason that is obvious. The names are Mitchell-Innes, Kearsley and Lapham.

We researched some of the names (the VCs and Viscounts) the ones that were guaranteed to be easy to find something, but many of the others might also be productive, if anyone else wants to have a go.

The 4 memorials recorded at this site are related as follows: the same WW2 bomb that killed Austin Thompson also demolished the WW1 memorial. This lost memorial (no image) was replaced with two memorials: the seat, and then, later, the plaque with the list of names.

The two plaques are in the porch, behind the columns. The seat is visible to the far right of our photo, through the railings.

Designed in the classical style by architect Henry Hakewill in 1827 this church was enlarged in 1875. Following serious damage by an arsonist in 1987 the interior was redesigned and the church, reopened in 1991, is now extremely light and airy.

There is one more memorial on the outside of this church, at the back, to its daughter church St John's, Wilton Road.

This section lists the subjects commemorated on the memorial on this page:
St Peters Eaton Square - WW1 memorial - names

This section lists the other memorials at the same location as the memorial on this page:
St Peters Eaton Square - WW1 memorial - names

That last phrase "Pray for his soul..." is surely a quotation but we can't so...

There are 54 stones in total, but it is hard to believe that places like Hern...

39 Bow Road. A tribute to George Lansbury who lived for 23 years in the house...