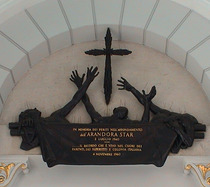 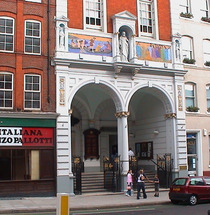 Translates as:}
In memory of those who perished in the sinking of the Arandora Star, 2 July 1940 . . . Their memory lives on in the hearts of their relatives, the survivors, and the Italian colony.
4 November 1960

This carved memorial shows 3 drowning men reaching up to the cross from the waves/shroud on which is inscribed the text. It was erected 20 years after the disaster, on the anniversary of the end of WW1 in Italy.

This section lists the subjects commemorated on the memorial on this page:
St Peters Church - Arandora Star

Deporting Italian and German prisoners of war the cruise ship was between Liv...

This section lists the other memorials at the same location as the memorial on this page:
St Peters Church - Arandora Star