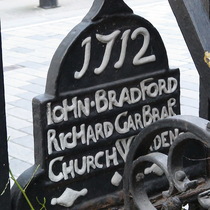 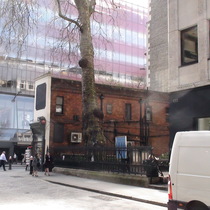 {On the back of a panel with an image of St Peter:}
1712 - Iohn Bradford, Richard Garbrar – Church Wardens

The medieval church of St Peter, Westcheap (now Cheapside) used to stand on this corner facing Cheapside. The blue information board gives 1196 as its date of construction. It was lost in the 1666 Great Fire and not rebuilt. In 1687 the parish built four shops (of which 3 remain) on the Cheapside frontage and the land behind continued to be used as a burial-ground and garden, enclosed with railings (still in place) in 1712. The last  interments were in 1846. In the 19th century it became a public park.

The Queen Eleanor cross in the City stood on Westcheap immediately opposite the church, 1291-1643.

The plaque about the houses can be seen in our photo, on the brick wall, at first floor level.

In our photo, in front of the tree, you can see an ornate wrought iron lantern bracket. The white figure towards the base represents St Peter, clutching his keys, a pair of which are shown again, picked out in white higher up. The churchwarden names are given on the back of the panel bearing the image of St Peter. The gate (immediately behind the lady in the black suit) carries a panel, of the same date, with the letters 'CPF' picked out in white (we cannot explain these letters). All of this can be seen in Google Streetview.

In 1797 William Wordsworth wrote a poem, 'Reverie of Poor Susan', which references this location:
At the corner of Wood Street, when daylight appears
There's a thrush that sings loud, it has sung for three years:
Poor Susan has passed by the spot, and has heard
In the silence of morning the song of the bird.

The poem goes on to describe how the birdsong prompts Susan to imagine the trees and the rivers of the countryside where she was brought up. Many sources quote the poem as if it referenced this Cheapside plane tree but it does not - the trees mentioned in the poem are imaginary. Even the bird is not wild. Wordsworth changed "There's" to Hangs" to make it clear that he's thinking of a caged bird.

The 'Cheapside plane' is one of the Great Trees of London.  Londonist's video about London plane trees says that this is the oldest tree in the City and possibly the oldest plane tree in London. And it seems that this tree is the reason why the surrounding buildings have not been replaced with sky-high steel and glass boxes. More trees!

This section lists the subjects commemorated on the memorial on this page:
St Peter Cheap - railings

Co-churchwarden of St Peter and St Matthew Friday Street in 1712.

Co-churchwarden of St Peter and St Matthew Friday Street in 1712.

This section lists the other memorials at the same location as the memorial on this page:
St Peter Cheap - railings