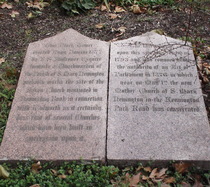 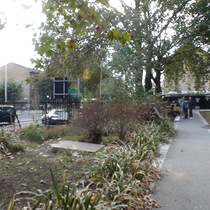 {On the tablet to the left:}
This Clock Tower erected Anno Domini 1877 by R. S. Faulconer Esquire, formerly a Churchwarden of the Parish of S. Mary Newington, probably marks the site of the Saxon Church mentioned in Doomsday Book in connection with Walworth as it certainly does that of several Churches which have been built in succession upon it.

{On the tablet to the right:}
The last Church upon this site was erected in 1793 and was removed under the authority of an Act of Parliament in 1876 in which year on May 1st the new Mother Church of S. Mary Newington in the Kennington Park Road was consecrated.

From the wording and the style, these plaques must have been erected along with the 1877 clock tower. The impetus behind both the construction of the new clock tower and these plaques must have been the removal of the church from its medieval site. We wrote that and then read the London Details page about this clock tower. On the picture of the clock tower that they found (and we have reproduced) you can actually see, just, these two panels either side of the door.

Three churches and two clock towers have been built on this site, but nothing remains today. A modern information board (which you can see, end-on, towards the right of our photo) tells the story and we have transcribed it here:

St Mary’s Churchyard was the site of the ancient parish church of Saint Mary Newington for some 800 years. It remains consecrated ground and continues to be an open space for the use and enjoyment of the public.

An important early record of this area is in the Domesday Book, the first census of England written in 1086 for King William the Conqueror. It noted that the Manor of Walworth was home for about 100 people and that ‘there is also a church there’. By the late 13th century the area had changed its name to Newington, probably because of the new houses or the ‘New town’ situated on the edge of the hamlet of Walworth. Later the area became known as Newington ‘Butts’ referring to the ‘Butts’ or earth mounds which were used by medieval archers for target practice {see archery practice}. One of the privileges granted to the archers was that if anyone was killed by an arrow near the ‘butts’, then the person who shot the arrow should not be liable for punishment.

The earliest reference to a church at the site comes from a document which places the medieval parish church at St May Newington churchyard in the fourteenth century. There is no further mention of the church until 1600 when the South Aisle was added by Sir Hugh Brawne.

In 1714 “there happened to be a sudden rupture in the wall” during a service causing the congregation to run out in confusion. Understandably  worried, a structural survey was undertaken revealing decay in the church pillars, walls and beams.

The main structure of the church was demolished in 1720, leaving only the Clock Tower. The Church was rebuilt and opened in March 1721. The new building incorporated the original large clock tower at the western end, possibly three storeys in height.

Due to an increase in attendance it was decided to rebuild the church in 1793. The church was extended by 25 feet to the west, it was built of brick, had a turret and cupola at the west end.

As the roads leading to Elephant and Castle became busier, an Act of Parliament was passed to widen Newington Butts. Due to the church ‘abutting so far into the road as to become a public danger’, the church was moved south to Kennington Park Road in 1876, where the current St Mary’s Church building stands today. The church building at Newington Churchyard was finally demolished in 1876 and the site became a public park.

In 1877 a clock tower was erected on the site of the old St Mary’s Church in a distinctive gothic style.  Paid for by a former Churchwarden, the Clock Tower became an Elephant and Castle landmark. It stood for almost a century until it fell into disrepair, was deemed a safety hazard and demolished in 1971. A memorial stone now marks the original site of the clock tower.

In 2007 Southwark Council relandscaped St Mary’s Churchyard with the financial assistance of the London Development Agency as part of the Elephant and Castle Regeneration Scheme. At the time of the landscaping works there was very little visual evidence that the site was a churchyard. The only remnants were a small number of gravestones placed along the boundary of Churchyard Row, the listed railings – which were extensively restored – and the clock tower memorial stone.

During the works to landscape the churchyard, workmen came across a number of old vaults and burial plots. These were carefully recorded by an archaeologist and left undisturbed.

The information board goes on to detail four “Figures of note”. We’ve treated each of these as a memorial.

This section lists the subjects commemorated on the memorial on this page:
St Marys Newington clock tower

In 1720 the old church was demolished, all but the clock tower, and rebuilt, ...

An early church was demolished in 1720, leaving only the clock tower. The new...

This section lists the other memorials at the same location as the memorial on this page:
St Marys Newington clock tower

Michael Faraday was born in Newington Butts and was baptised at St Mary’s Chu...

The plaque was originally erected on the house where she had lived. This was ...