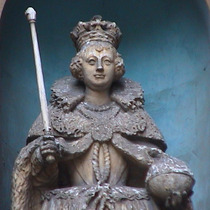 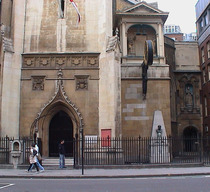 {Carved just below the feet, much weathered but it could be:}
1586

{On a plaque below the statue:}
This statue of Queen Elizabeth formerly stood on the west side of Ludgate. That gate being taken down in 1760 to open the street was given by the City to Sir Francis Gosling Knt. Alderman of this ward who caused it to be placed here.

On stone above QE's statue: "Parochial Schools. St Dunstan in the west. A.D.1839."
The history of this statue (and those of King Lud and his 2 sons in the vestry porch) is complex. Current thinking is that the Queen dates from 1670-99 and is by Cartwright or Bumpstead or Kerwin. There is a barely legible date on the base, 1586, which is explained by that being the date that the Lud-gate (where this statue, or its predecessor, was originally placed) was rebuilt, in the Queen's reign.

The Ludgate was restored again in 1670 after the Great Fire. When it was demolished in 1760 Sir Gosling arranged for the statue to be put on the St Dunstan's church that stood here but then that too was taken down and in 1829-33, the current St Dunstan's church was put up. Meanwhile it seems that the statue spent the time in the basement of a nearby pub. It was only when that too was demolished in 1839 that the statue was rediscovered and put in its current niche on St Dunstan's. A hazardous journey for what is said to be the only statue of Queen Elizabeth carved in her lifetime and the oldest outdoor statue in London. Millicent Fawcett left £700 in her will for the upkeep of this statue. The funds are managed by the Society for the Protection of Ancient Buildings.

In 1928 the statue was restored and we thank Jamie Davis for finding this link to the British Pathe news film of the unveiling, where we learn that the 80-year old Millicent Fawcett unveiled the restored statue, although she does not actually appear in the footage.

You can see three of these memorials in our photo of the church. The fourth, the plaque to Garvin, is on the east-facing wall to the left of the Northcliffe bust.  IanVisits has visited the church.

This section lists the subjects commemorated on the memorial on this page:
St Dunstans - Elizabeth I statue

This section lists the subjects who helped to create/erect the memorial on this page:
St Dunstans - Elizabeth I statue

This section lists the other memorials at the same location as the memorial on this page:
St Dunstans - Elizabeth I statue

Designed by John Shaw, Jnr., even in its current rather dilapidated state, th...

This is a rare representation of Roosevelt standing, albeit with a stick. A n...