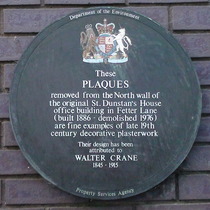 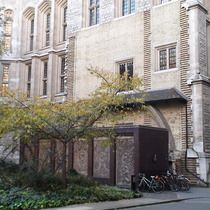 These plaques, removed from the North wall of the original St Dunstan's House office building in Fetter Lane (built 1886 - demolished 1976) are fine examples of late 19th century decorative plasterwork. Their design has been attributed to Walter Crane, 1845 - 1915.
Department of the Environment - Property Services Agency

{Each panel carries the name of a country, from the left:}
America, Australasia, Europe, Africa, India, Canada.

This example of architectural reclamation was brought to our attention by Discovering London's Friday elephant. There you can see not just the elephant but some excellent photographs of these 6 plasterwork panels.

This bike shelter is in the garden of the Maughan Library.  See Old Public Record Office - 4 queens - for more info about the building and an explanation for the arch that can be seen on the wall behind the bike shelter.

This section lists the subjects commemorated on the memorial on this page:
St Dunstan's House - plasterwork panels

This section lists the subjects who helped to create/erect the memorial on this page:
St Dunstan's House - plasterwork panels

Unusually this memorial was erected before the end of the war. There may be ...