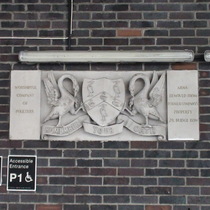 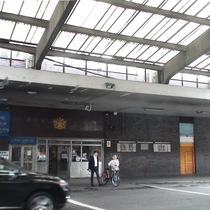 {Below the crest:}
Remember your oath

A property in Budge Row was left to the Poulters in 1727. Pity the flanking stones don't say when the arms were removed since that probably happened when the property was sold.

Initially we thought that, of all the birds that might be found inside the Poultry Market surely the one you won't find is the swan. Unless you are the Queen when presumably you are served "under the counter". But then we read that in 1368, the Company of Poulters received the power to regulate the sale of poultry, swans, pigeons, rabbits and small game.

Referring to our photo, the plaques are,left to right: Poulters; opening; Butchers.

This section lists the subjects commemorated on the memorial on this page:
Smithfield - Poulters

From The Poulters Charter: In 1727 John Newman left his property in Budge Row...

This section lists the other memorials at the same location as the memorial on this page:
Smithfield - Poulters

What is it with granite plaques? Surely by 1963 someone ought to have learnt...

In 1933 the Duke of Cornwall was Prince Edward, who would later briefly becom...