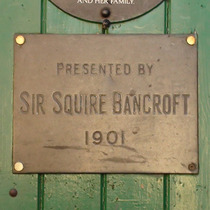 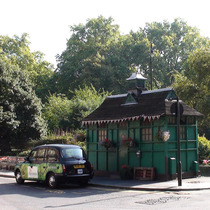 A much less interesting circular plaque above this one reads:
The restoration of this shelter in 1987 for the Cabmen's Shelter Fund was promoted by the Heritage of London Trust with generous assistance from the former Greater London Council, The Bedford Estate, The Swan Trust, Miss Hazel Wood and Brenda Bancroft and her family.

We learn from Cabmen's shelters: This cabmen's shelter spent most of its life in Leicester Square, once a major stopping point for taxis. When pedestrianisation arrived in the late 1980s, the shelter became redundant and was moved to Russell Square.

This section lists the subjects commemorated on the memorial on this page:
Sir Squire Bancroft

To the glory of God &amp; in memory of William Benett, Esquire, these schools...

The poppy and the British Legion crest both suggest that this memorial is com...