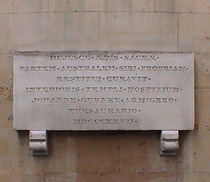 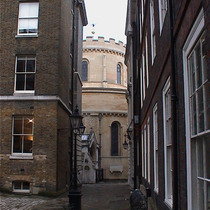 Credit for this entry to:
Rosemary Jeffreys

{Translates as:}
To John Gurney, bearer of Arms, Treasurer, He restored and conserved the south part, which is his own, of the Inn of the Inner Temple. 1827.

{or:}
Of this holy church before you, the Inn of the Inner Temple took responsibility for restoring the south section reserved for it when (or perhaps under the supervision of) John Gurney was its Bearer of Arms and Treasurer in the year 1827.

We are indebted to Rosemary Jeffreys for the translation from the Latin. The business about "the south part being his own" is partly explained at Inner Temple Library where we found this:
Members of the Inner Temple traditionally sit on the south side of the Church, the southern half being assigned to the Inn under the 1732 deed of partition. The custom was relied on by the Inn in former times as indicating its precedence over the Middle Temple: a disputed claim which has long ceased to possess any significance. It also explains the inscriptions on the outside and inside of the Round, which record the restoration of the south side by the Inner Temple in 1827, when John Gurney was Treasurer.

2015: Via Facebook Paul Perrot proposed the second of our translations and raised some good questions all requiring further research: the extent of John Gurney’s involvement and oversight; did he simply pay the bill? ; when was this inscription written?

This section lists the subjects commemorated on the memorial on this page:
Sir John Gurney

Plaque unveiled by Sir David Attenborough and, unusually by one of those comm...