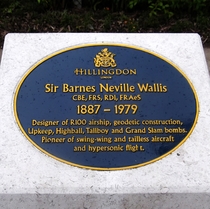 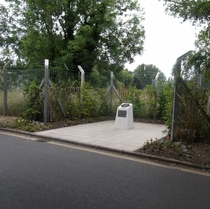 This marks the site where Wallis's water-skipping explosives were tested on models at the Road Research Laboratories. Tom Long sent us this 1946 map which shows the Road Research Lab buildings a little to the south, on the Colnbrook By-pass, to the east of the 4 houses that are still there, surprisingly since Heathrow airport wiped out most of what's shown on this map.

This section lists the subjects commemorated on the memorial on this page:
Sir Barnes Wallis - Harmondsworth

In full: His Majesty's Airship R100.  It was a privately designed British air...

This section lists the subjects who helped to create/erect the memorial on this page:
Sir Barnes Wallis - Harmondsworth

The borough was formed in 1965 from the Municipal Borough of Uxbridge, Hayes ...

This section lists the other memorials at the same location as the memorial on this page:
Sir Barnes Wallis - Harmondsworth

{By an image of a Lancaster Bomber:} Tests conducted by the Road Research Lab...

Corporation of the City of London Near this site the Grand Lodge of English F...